Augie, Bellow, Frankenstein and Me

In 1964 I returned with my family from Kampala, Uganda, where we had lived for two years, and was hired by Saul Bellow to read, answer and categorize some of the letters he received in response to that most epistolary of novels, Herzog. It was Bellow’s second big commercial success, (the one which would make him rich, although he later complained his ex-wives took the money) the first being The Adventures of Augie March, in 1953, now transformed into a play at Court Theatre at the University of Chicago, where it has been extended into late June, in a production the Wall Street Journal   called: “..a full fledged play..  totally and triumphantly successful,  [a] three and a half hour serio-comic extravaganza,  so light on its feet it scarcely feels two hours long….” [Terry Teachout, “‘The Adventures of Augie March’: Chicago Kid Makes Good,” Wall Street Journal, May 22, 2019 (p. A19).]

The cast of The Adventures of Augie March. Photo by Michael Brosilow

Adding on to the theme of linear writing transformed into theatre, expertly developed by the playwright David Auburn (author of the Pulitzer Prize winning Proof) in collaboration with Court Theatre’s artistic director Charles Newell, is an exhibit of manuscripts, notebooks (including the notebook containing the first draft of the novel) as well as letters and other handwritings from the University of Chicago’s Special Collections of Bellow’s papers.

This trope appears graphically in the images of handwriting, faint and blurry, scrolling across the stage in Augie March, and again on the shadowed steel of the giant Chicago railroad bridge under which the actions and adventures of the novel are reimagined– as time and generation jumping scenes, on several continents — on a mostly bare stage where simple props, a table, some chairs, are carried on and off by the actors.

At the same time that Court Theatre is presenting a theatre version of The Adventures of Augie March on the south side of Chicago, Lookingglass Theatre has opened another new adaptation of a novel, Mary Shelley’s Frankenstein in the downtown Watertower Waterworks, by David Catlin, the theatre artist, director and Lookingglass ensemble member known for other stage adaptations including Lookingglass Alice, Moby Dick, and The Little Prince. [Mary Shelley’s Frankenstein will run through the summer.]

Students of literature, playgoers and scholars absorbed in the differences between literary forms need to get themselves to Chicago to experience both of these adventurous, bold transformations.

Lookingglass is a company known for circus infused adaptations of literary classics such as Twenty Thousand Leagues Under the Sea, Treasure Island, The Odyssey and signature stagings of the novels of Charles Dickens, Dostoevsky and others. Lookingglass ensemble member Laura Eason’s adaptation of Jules Verne’s novel Around the World in 80 Days premiered at Lookingglass and recently was seen at Manhattan’s New Victory Theatre.

Students of literature, playgoers and scholars absorbed in the differences between literary forms need to get themselves to Chicago to experience both of these adventurous, bold transformations.  David Catlin’s Mary Shelley’s Frankenstein tells the Frankenstein story from the point of view of the 18 year old author, putting the writing and original dramatization in the context of the young woman’s circumstances, as she and her not yet husband, the poet Percy Bysshe Shelley and Lord Byron spent a Bohemian, poetry-infused summer in a Swiss villa, idling away their time and amusing one another through a winter-in-summer caused by the huge volcanic explosion in Indonesia in 1816.

The cast of  Mary Shelley’s Frankenstein. Photo by Liz Lauren

David Catlin’s play puts the composition of the novel in the context of Mary Shelley’s recent, lonely loss of a premature daughter, and adds her imagined ruminations on the blurry line between death, birth and life, and of love that approaches and attempts to cross those boundaries.

Frankenstein, like The Adventures of Augie March, was an immediate commercial success when it was published two years later in England. So incongruous was that success that the first edition it was put out under Mary Shelley’s husband’s name. (She was by then married to the famous and soon to be dead poet, Percy Bysshe Shelley.)  The public did not believe this fantastical story could have been written by a woman, much less by an 18 year old girl.  Frankenstein’s ‘creature’, so brilliantly conceived by Mary Shelley, is the bringing to life of a quasi-human ‘being’ (put together from corpses) to produce [with electricity] a live man who is a ‘monster,’  who will not die and cannot be killed, yet feels the human need for love and revenge.

Novels, poems and plays are critically different forms, each developed in its own tradition, and each are vastly different forms of human communication. The interchange between a writer and a single reader, through the narrative voice the author chooses to assume in a novel or poem (not to be confused with the author herself) can result in laughter, tears, suspense, love, horror and fear and more. And these emotions are the bedrock of theatre, too.  After all, theatre is what literature does in the evening.  But theatre can’t be an actor standing motionless and reading a book to the audience from the stage, although the celebrated program in Theatre and Performance Studies at Northwestern University, which produced both David Catlin [and Mary Zimmerman and David Schwimmer] and gave birth to the Lookingglass ensemble, began as the ‘Department of Reading Aloud’. 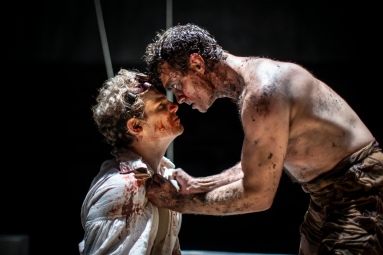 Walter Briggs and Keith Gallagher as Victor Frankenstein and his unholy experiment. Photo by Liz Lauren

In both pieces the answer to the ‘how’ of the transformation from novel to play is: with a great deal of art and artistry!  Mary Shelley’s Frankenstein puts us in that nineteenth century, haunted Swiss villa with those very interesting, idiosyncratic people,  telling the story and the ‘how’ of  that first literary creation, and then fleshing out the material with the actual  lives and fates of the girl-author and her celebrity companions. It is a story of family, life and art and of a young brilliant nineteenth century woman, who is a writer finding her voice.

Bellow’s novel The Adventures of Augie March is stitched together by the coherence and distinctive tone of the exuberant, seductive first person narrative voice. That is what grabbed readers in the 1950’s and what is carried over to the play. In the novel a boy sets out to learn, and teach himself, what it is to be a man, by watching the men around him, his family and others he falls in with. 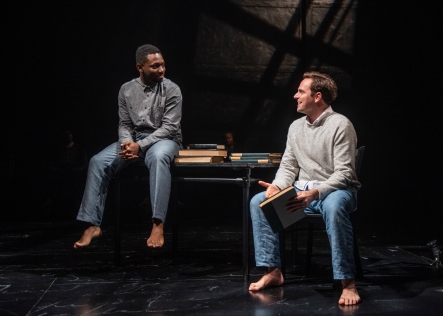 The novel foreshadows the narrative design of the later Herzog, with its large chunks of philosophical exposition put in the form of imaginary, unsent letters to living and dead philosophers, literary masters, and others known for their voices, for what they are said to have said.

Mary Shelley’s Frankenstein, the novel, has proved itself impervious to the passage of time. The Adventures of Augie March is a novel which could only have been written, marketed and launched in the 1950’s, before the women’s revolution and the Internet.  How do the playwright and director now transform this mid-twentieth century piece of linear writing, held together over time and place by the identity of a single, distinctly male narrative voice, into a theatre piece, when one principal challenge is to get that diverse and mixed 2019 audience, collectively, to turn off their cell phones?

After all, theatre is what literature does in the evening.

The Court Theatre’s The Adventures of Augie March takes the singing internal narrative of Augie’s journey in place and time and restages it with dance, music, and visual projection. Large chunks of plot and abstract ‘thinking aloud’ are put in the voices of characters and family members who would never recognize or own that poetic and forceful language. The story on stage is propelled by choreographed movement (under the tutelage of Pina Bausch dancers) and the shadow puppetry of Manual Cinema. The entire ensemble moves across the stage as a group, and then divides to become individuals in short scenes with minimal sets, some chairs, a table, a coat rack,  a bed. The movements of the ensemble are metaphors for the passage of time.

David Catlin uses similar techniques to transport us to the mists of the Swiss winter-in-summer of 1816, and tells the story of the creation and first reception of the terrifying ‘creature’ made from the dead.  Spirits fly and speak, and we follow those enchanted peoples’ lives, then and afterwards.  Their story is also told with movement and choreography, and linear time and narrative are rendered, and become fluid.

The dramatization of The Adventures of Augie March asks us to consider this tale in the context of all coming of age stories, as they are embodied in writing, in thinking, and in the imagination. David Catlin recreates the imagination of Mary Shelley in 1816 and after. Both are ensemble pieces, telling and retelling an individual, particular story, of one woman or man, then of family, friends, and passersby in their lives.  This telling and retelling of a particular life, an artistic life, a story of families, of friends, who they were and how they were like us, or not, is what we recognize. A story, who they were,  how they loved and how they lived, that is what literature, whatever its form—novel, play or poem—has always been about.  And why we care enough to read, watch or listen. 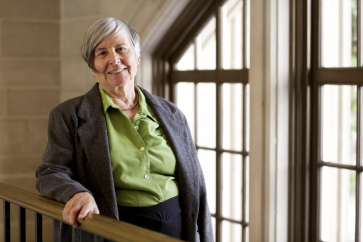 Leigh Bienen is a writer, most recently of Florence Kelley, Factory Inspector in 1890’s Chicago, and a Senior Lecturer at Northwestern Pritzker School of Law in Chicago. She is a longtime fan of Chicago theatre and a board member of Lookingglass theatre.

Following the run in Chicago (May 8–August 4, 2019), Lookingglass Theatre Company will bring Mary Shelley’s Frankenstein to the McCarter Theatre Center in Princeton, New Jersey for a three-week run in the fall (Oct. 15 – Nov. 3, 2019).