Television has been anticipating a woman president for years.  In “Madam Secretary” Elizabeth McCord (Téa Leoni) rose to a vice-presidential candidate; in “The Veep,” Julia Louis-Dreyfus’s character succeeded to the presidency; on “Scandal,” a powerful Washington crisis-manager (Kerry Washington) is also the president’s confidante.  The skits on the satirical “Saturday Night Live” played Hillary Clinton as a sure thing.

In New York theatre there is an impetus to promote visibility for women.  More new playwrights and directors are appearing off and off off-Broadway. Although the best feminist or woman-centered productions this season have familiar names, the message is empowerment (or its lack).

Director Phyllida Lloyd (The Taming of the Shrew) has fashioned  a brilliant, high energy Tempest , which is also  a gloss of our time.  As with the other plays in her trilogy (Julius Caesar and Henry IV in previous seasons at St. Ann’s Warehouse, Brooklyn), the all-women cast are tough prison inmates, who file through the lobby before the doors open.  We hear cell doors clank, buzzers sound (Pete Malkin, sound), and roll called on the arena stage while guards flank the audience at the top of the bleacher seats.  This immersive experience continues in various degrees throughout.  Harriet Walter plays both prisoner Hannah, who has served 35 years of a life sentence, and Hannah as Prospero.

Set on a basketball court, the play has a minimal set design (Bunny Christie).  The costumes (designer Chloe Lamford) are in shades of gray. The script has been cut. Prospero’s exposition and the Miranda-Ferdinand scene have enough words with room space for the actors to allow emotions to unfold.  Yes, this is Shakespeare’s The Tempest, but it is also remembering The Tempest, the dramatic moments caught in flashes of lightning.

(L to R, not including the actresses whose backs are to us): Sheila Atim, Jade Anouka (above), Martina Laird, Zainab Hasan, Liv Spencer. Photo:Teddy Wolff

The actors are totally engaged in their roles and the line readings are as lucid as though we all speak blank verse.  Performance trumps gender and appearance through the magic of transformation.   The actors create distinctive personalities and accents.  Caliban (Sophie Stanton) is a homeless man who trails garbage; his crime was a sexual attack on a younger Miranda (Leah Harvey) ,  which he attempts to repeat as we watch. The Stefano-Caliban-Trinculo (a charismatic Karen Dunbar) encounter, one of my gauges, is effortlessly so comical, with no artifice or panning.   As wannabe king, Stefano (Jackie Clune) wears a paper crown from McDonald’s; his scepter is a toilet plunger.

There is a depth and passion to the production that comes only from a director’s long, loving relationship with a work of art.  The inspired modern touches spring from insight.  Ariel (Jade Anouka) is a magical, quick-costume changer.  She uses chloroform on a white handkerchief, not a spell, to put the men of the court to sleep. Ferdinand (Sheila Atim) must clean up garbage, not chop wood, and you can feel his dismay as Miranda helps.  Prospero, even protective, watches from a referee chair at the top of the bleachers. The scene is light and playful but when Miranda offers to serve Ferdinand, Prospero raises  his hands  in dismay. They marry in matching bowler hats and skirts, two brides. Giant white balloons, on which images are projected (Duncan McLean), tumble from above. Prospero closes the play by popping them.

Lloyd believes that when Shakespeare’s plays are performed by a single gender, “their veins become clearer.”  After a certain age, women have fewer roles, Walker added.  “I felt that I was at the top of my game – yet at that point was going to have to abandon the sport.”  The audience for The Tempest  sat for an hour and 45 minutes without an intermission and were grateful that Walker and Lloyd were still in the game. 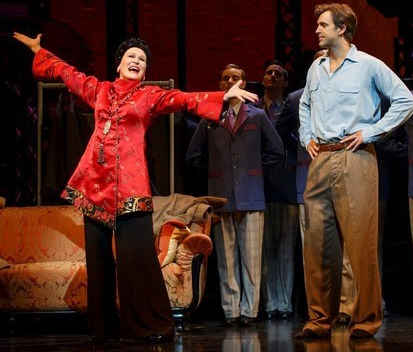 If you saw Glenn Close twenty-two years ago as a breath-stopping Norma Desmond (Tony, Drama Desk awards)  in  Andrew Lloyd Webber’s Sunset Boulevard  (Don Black and Christopher Hampton, book and lyrics),  you will  be moved again by the new production, directed by Lonny Price  at the Palace Theatre.  It is different. The opulent set and costumes have been minimalized, freeing us to focus on the characters and music. Norma Desmond’s spirit towers even as Close’s physical frame seems small and fragile.  She can’t hit all of the notes, is even off-key, but that somehow makes Desmond even more tragic.  (The actor has always known how to inject a glitter of classical acting into a role.)  Psychological explanations and dramaturgical problems are irrelevant.  A deposed queen longs for return to her rightful throne.  The enemy is time and technology.  Like Joe Gillis, her lover, we feel pity and fear. In the closing scenes, she recognizes the impossibility of a comeback  and ages a decade. It is an artistic triumph.  Frail and majestic at once, she shoots her departing lover in a final gesture of grandeur, before dissolving into madness.

Fred Johanson as Max von Mayerling, her factotum, greatest fan, and ex-husband, has a rich baritone that is as seductive as the score, which allowed  me no critical distance.  The large onstage orchestra is conducted by Kristen Blodgette.  Michael Xavier and Siobhan Dillon as the attractive young hopefuls  have beautiful, trained voices.

Obviously the Wooster Group recognized something missed in the 1970s.  Contemporary reviews focused on the classically beautiful Germaine Greer and the misogynistic Norman Mailer.  The Town Hall Affair spotlights Jill Johnston (Kate Valk), who bookends the work. Before the panel begins, she announces, stage right, that she is launching her career as a boxer, a metaphor for a feminist warrior.   Later we see her wearing only one glove.  Mailer,  who shut her down after her 15 minutes were up and declared that feminists have no sense of humor, dismissed her, her mockery and  her deliberately disruptive agenda.

A clip of the film ran behind the actors mouthing the original words. Why?  Because these positions have changed little in 40 years.

Johnston kissed Greer (Maura Tierney) when she joined the panelists (late) and Greer played along, but Greer also responded when Miller, sometimes at his most chauvinist, flirted.  Johnston proclaims her vision of a utopia, a lesbian nation (as a metaphor?) where women support and love each other.  She does not want a scholarly or rational discussion, especially the Freudian approach posited by Trilling about a woman’s orgasm.  Trilling is played by Greg Mehrten, perhaps to highlight her male stance. Scott Shepherd and Ari Fliakos play Norman Mailer simultaneously, his presence having twice the power and voice.

The Wooster Group derived “pleasure” in giving Johnston the final word.   She has the vision, the dreamer who believed that women should resist, fight, and defend one another. The Town Hall Affair may not always work as theatre-in-the-moment, but it is conceptually brilliant.

Glenda Frank: A poet who discovered TDF and fell in love with theatre. Now she  takes  her grandsons to plays. “I loved the little walk ups, productions with more actors than audience, revivals, new plays, 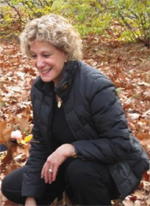 Fringe.  I began writing reviews. I pursued a Ph.D. in Theatre, amazed at the insights of the actors, directors, and designers in my seminars. I teach at FIT and vote for Drama Desk, Outer Critics Circle and Henry Hewes Design awards. My plays have been part of the League’s New Play Festivals.” Member: Playwrights Gallery and ARTC.

A version of this article appeared in Plays International & Europe and is reprinted with permission here.