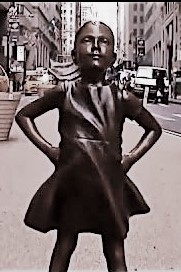 As Director of Labor Relations for the Broadway League, Producer Elizabeth McCann and I used to joke during negotiation sessions we would know  we “made it” when the day came we would clinch a deal while in the ladies room! The male negotiators would always emerge from the men’s room proudly  announcing they “sealed a deal.”  Women in all walks of life still fight for a place at the table so they can crack, break or squeak through the glass ceiling—or even make a deal in the ladies room.  Theatre especially is a challenge for women of various skills who seek peer recognition, economic independence that success brings, and gender equality.I was struck with the idea of “making it” after reading a recent NY Times Arts and Leisure article that featured the playwrights, Paula Vogel and Lynne Nottage. The headline read, “Finally, (But What Took So Long?)”.  I wanted to pose the same question to this newspaper that finally queried it in a bold headline,  placing that issue front and center for its readers.  Vogel and Nottage brought with them Rebecca Taichman, Kate Whoriskey and a team of creative women in their Broadway debuts.  In the article, Pulitzer Prize playwright, Marsha Norman, generously thanked the universe and called out Vogel and Nottage as heroes for generations of women writers and readers and audiences.

Women in all levels of the entertainment industry are waiting in the wings, waiting to go on, hoping they would be the ones to overcome women’s inequality in the arts, that still gets little public notice or press attention.  For those of us who have cheered remarkable women on and off the stages of America, we can’t help but bask in their recognition. Yet most women in the theatre remain submerged in the dark shadow of economic inequality. With a little bit of luck, and very hard work they move ahead to where their creativity can develop and flourish, but it’s still a struggle.

Daryl Roth, Co-chair of the League of Professional Theatre Women’s Advisory Council reminded us of our individual responsibility as she welcomed attendees to our recent awards presentation. “It is our mission to help bring more women into the industry, and support those already working within.  I believe one of the most obvious ways to do so is by being a good role model, a caring mentor, through the work we create and present,” she said.  She questioned, “How can women support other women?  It’s by doing just that…..seeking out playwrights, surrounding them with female directors and designers, by giving their work the opportunity to be seen.  It’s our responsibility to nurture the talent and offer the experiences that will open the doors to more opportunities (for women).” She concluded her remarks by encouraging all women to exponentially expand the variety of roles for all women in the theatre.

The arc of history for women to gain equality is remarkably long. It took Susan B. Anthony 43 years (1874-1917) to gain passage for the right-to-vote in the 19th Amendment .  Should we be heartened by the events in the musical world to witness the Metropolitan Opera’s performance of an opera, first composed by a woman, (Kaija Saariaho’s, L’Amour de Loin) in the 2016-17 season, that was written and performed only 113 years earlier?  Gender equality in the arts is sometimes slower than a snail’s pace.

When International Women’s Day passed in March, I couldn’t help but wonder what it  takes to realize the ability of women to influence inspirational and creative achievements in our theatrical culture and workplaces.  If ever there was a time in our history when we desperately need the nurturing, molding hand of women, it is now…. just like the euphemistic statue of the “Fearless Girl” staring down the “Bull of Wall Street”.  She has become a symbol of standing up to fear and power. She is “making it!”

Harriet Slaughter is a former Co-President of the League of Professional Theatre Women. During her tenure, she served as co-producer of the Women in Theatre on CUNY TV, assisted in two exhibitions at the NY Public Library at Lincoln Center featuring women designers and the League’s 30th Anniversary; contributed to the Women in Theatre print publication.   Since retiring as Director of Labor Relations for the Broadway League, she writes and paints. Her poetry has appeared in numerous anthologies. Her book, ARS POETICA was published in 2014.   Her art work has appeared in galleries and juried shows in New York City and Long Island.